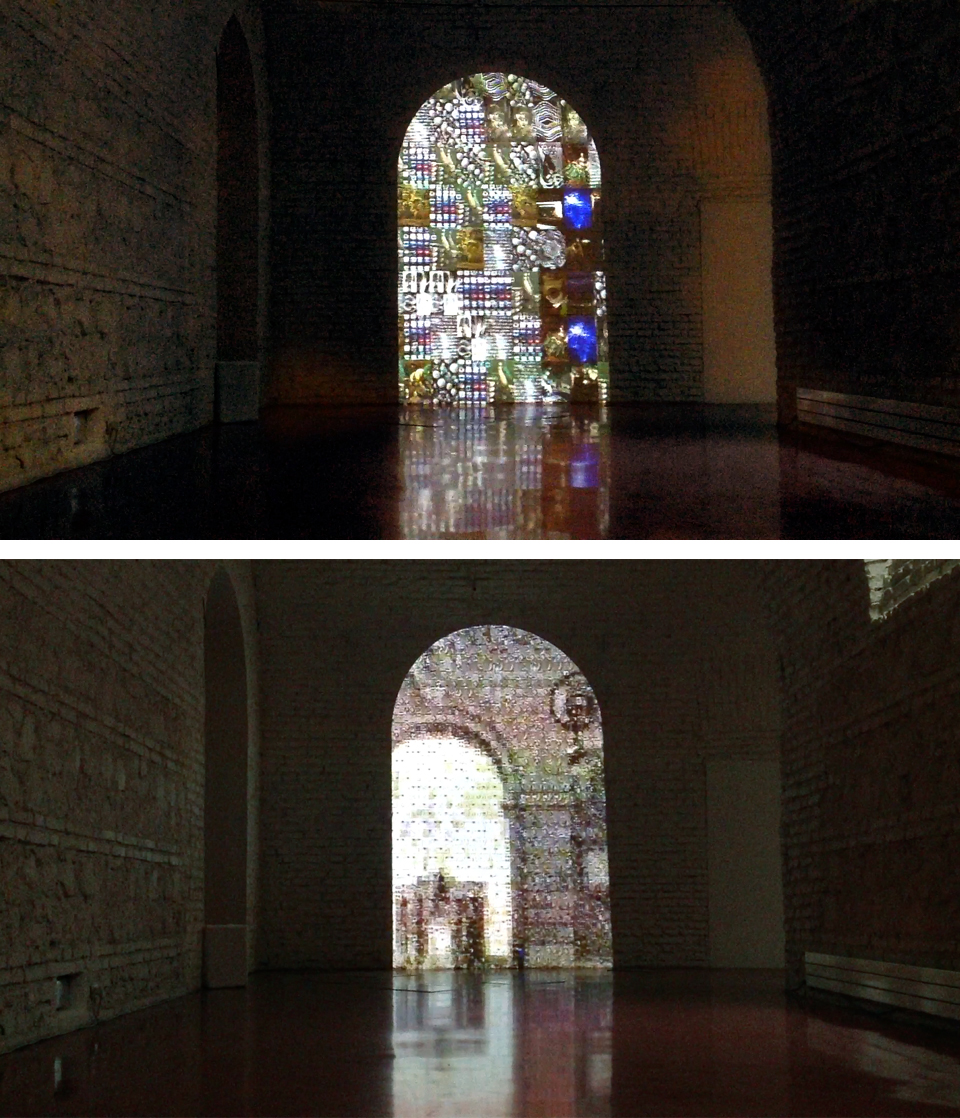 This multimedia installation builds a case for a new sort of empire that has survived all others. It is the ‘empire of image’ that we know today as a mechanical, industrial, social, and even autonomic phenomenon. It has mutated from mosaic walls to paintings and then from prints to digital screens. Arguably, the confluence of mobile social media and networks has irreversibly changed the ontology of image as it led us through the gates of a new realm.

Images are no longer just pictorial, they coalesce into an environment, an ecology, and even an atmosphere. They can appear like passing snowflakes or like memes of tsunamic proportions. Image has both imploded and exploded. Overwhelmingly abundant, image is less valuable than ever before, but image has nonetheless supplanted the power of traditional language systems and is changing culture in profound ways. This occurrence evokes the rise of Rome and its impact on the West.

In the lineage of Greece, Rome carried the image of civilization to build and grow an empire, and like Greece it eventually fell into glorious ruins. The image of a civilization that is imperial, cosmic and divine is what remained.

GATEWAYS & CITIZENS
Where walls, gates, and icons have fallen, virtual ones have risen. Gates open, close, and frame cities while images appear and fade on walls and screens. We abandon cities and forget images when they stand against our ideas, but ultimately images reappear to reflect everything that has been made: people, temples, gods, palaces, jails, and megalopolis. We have never made, owned, edited, published, appeared in, and shared so many images in so many static, moving, luminous or fleeting forms. They multiply, disseminate, migrate, besiege, sprawl, invade and occupy. Images are blending into all things. Above all, they seek semantic affinities, hence blending into each other to form image swarms. They even coalesce to reveal new gates.

A dream is a scripture, and many scriptures are nothing but dreams.
__Umberto Eco
What does culture want? To make infinity comprehensible.
__Umberto Eco
All our knowledge has its origins in our perceptions.
__Leonardo da Vinci
The house was there, but I designed the landscape.
__Malaparte
A man paints with his brains and not with his hands.
__Michelangelo
The aim of art is to represent not the outward appearance of things, but their inward significance.
__Aristotle
It is through image that we find our place in the world.
__MAD
A rock pile ceases to be a rock pile the moment a single man contemplates it, bearing within him the image of a cathedral.
__Antoine de Saint-Exupery
I saw the angel in the marble and carved until I set him free.__Michelangelo
Time, which changes people, does not alter the image we have retained of them.
__Marcel Proust
More is never enough.
__MAD
We can easily forgive a child who is afraid of the dark; the real tragedy of life is when men are afraid of the light.
__Plato
You don’t take a photograph, you make it.
__Ansel Adams
A picture is worth a thousand words.
__Napoleon Bonaparte
You can’t really say what is beautiful about a place, but the image of the place will remain vividly with you.
__Tadao Ando
Our idea of nature is increasingly being determined by scientific developments. And they have become decisive for our image of reality.__Thom Mayne
The photographic image…is a message without a code.
__Roland Barthes